With Canada Day fast approaching, I have decided that this week will be Canada week. Each day I will blog about something or someone distinctly Canadian.

What is more Canadian than hockey?

Hockey is such a big part of the fabric of our society. All year long on suburban streets throughout the country you will hear the cries kids saying, “Car!” and “Game on!” as they play street hockey, fantasizing that they will one day be playing for real on the ice.

The NHL has more players from Canada than any other country. So much so that it is not sacrilegious to root for an American team because they are all filled with Canadian players. The Canadian men’s national ice hockey team (or Team Canada) has won more Olympic gold medals than any other country with a total of 8. Yes hockey is a point of pride in Canada.

Hockey players are treated like kings here. Little boys across the country grew up idolizing men like Gordie Howe, Bobby Hull, Mario Lemieux and of course, the Great One, Wayne Gretzky. 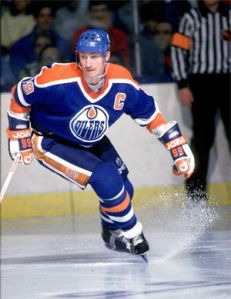 Even the Canadian restaurant chain, Tim Horton’s was started by a hockey player… Tim Horton played for 22 seasons in the NHL for the Toronto Maple Leafs, the New York Rangers, the Pittsburgh Penguins and the Buffalo Sabres.

So here’s to hockey, our national pastime. I can think of no one better suited to end this post than Canadian country and folk singer Stompin’ Tom Connors singing the Hockey Song.