The hosts of The Talk

There seems to be a trend of late where famous women are showing the world their bare… faces.

From Teri Hatcher and Tyra Banks to Oprah Winfrey and the hosts of The Talk, famous women are showing us what they look like without make up and the media is touting them for being so brave. 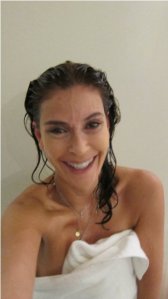 When I was growing up, I never saw my Mother wear make up. To this day, the most glam she gets is when she paints her nails for a fancy evening out to dinner. She never had any trouble finding or keeping a man. She married my Father when she was 22 and they never parted. As most girls who enter their teens, I rebelled against the kind of woman my Mother was. I was very into make up and fashion. Of course it didn’t help that throughout my entire childhood I was teased and criticized for being ugly. I hit my teen years with little to no self esteem. My Mother understood that make up was something that I desperately wanted to play with, so, since she couldn’t teach me about it herself, she took me to the local beauty salon and had one of the experts give me a lesson, then bought all the product that were used on me. I am still very grateful to her for encouraging me to follow my own path, even though it was not her path.

As I grew into my twenties and thirties, I never left the house without a full face of make up. Even just a trip to the corner store required, at the very least, concealer, mascara and lipstick. It wasn’t until I hit 40 that I realized that my face is beautiful without a stitch of make up. That’s the ironic thing about being a young woman. When you are at your most beautiful physically is when you are your most insecure. There are times when I have wished that I could have it to do over again with my newfound confidence and priorities along for the ride, but you couldn’t pay me enough to go back to my twenties without all of the wisdom I now have. Now, I maybe put on lipstick once a month. I haven’t worn a full make up application in over 4 years and I don’t see it as bravery, just as a shift in self perception and priorities. I am single and still get plenty of male attention. The attention I get now is different, though. It’s no longer whistles and hoots from afar (which I hated). The attention I get now, without make up is more of a real interest in who I am. I have heard from men, on more than a few occasions, how attractive and sexy my confidence is.

So, while I applaud these famous women for ditching their masks and showing the younger generation that you can be beautiful with your naked face, I resent the fact that they seem to be doing it for less that altruistic reasons. I also resent the media for making it seem like such a big deal. In the video below, the anchors of The Showbiz Countdown are reacting to the hosts of The Talk recently doing an entire episode of their show without make up.

It also bothers me that they all had to be wearing robes or towels during the episode, as if to say that the only appropriate time in which to be sans make up is before you are fully dressed.

In the wake of one of the world’s most powerful women, Hillary Clinton, being vilified for going without make up this just seemed like a stunt for ratings. When Hillary Clinton goes without make up, she does it because she has more important things to think about. She has also reached an age where she is more worried about who she is and what she is accomplishing than what she looks like, and for that I say Brava!

It’s sad that women, in general, have yet to reach a stage where we are no longer judged first and foremost by what we look like and second by our accomplishments. The fact that the media jumped down throat of the Secretary of State for going without make up speaks volumes about how far women have yet to go before we are truly equal.

6 thoughts on “Women who have bared it all”

Error: Twitter did not respond. Please wait a few minutes and refresh this page.