One of the things I like most about working in a hotel environment is that I get to meet a wide variety of people. I while back, I met an 80 year old woman named Cindy. Cindy was one of the original Las Vegas show girls. She still looked very glamorous and her skin had this lovely glow. When I commented to her on her youthful aura she whispered her secret for staying young at heart, “Younger men and horizontal exercise”. It seems Cindy is married to a man 25 years her junior and she couldn’t be happier. The feminist in me immediately fell a little bit in love with her.

Since that evening, my mind keeps wandering back to Cindy and her younger man. If Cindy were an 80 year old man married to a 55 year old woman, I would immediately leap to certain conclusions like she’s with him for his money. Yet, when Cindy told me about her 55 year old husband I thought, good for her. Yes, I realize that I am perpetuating a double standard. That’s the thing about growing up feminist, sometimes I excuse behavior in women that I would judge when exhibited by a man. 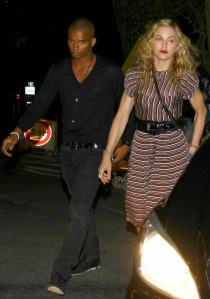 Us second wave feminists fought so hard trying to be treated as equal to men that we forgot one key thing… JUST BECAUSE MEN DO IT, DOESN’T MAKE IT RIGHT.

Don’t get me wrong, I have been guilty of dating across generations. When I was 26, I dated a man who was 66 for a few months before realizing that, even though I am what they call an old soul who loved to listen to his stories of times gone by, we had very little in common. Recently, I went on a couple of dates with a man 11 years my junior (I’ll save you the math… he’s 37 and I am 48) and was surprized to find that we had a lot in common. He even got the vast majority of my references. I never understood those people (both male and female) who say that younger lovers make them feel younger. Honestly, this younger man does not make me feel younger. For some reason I see him as older than he is, until a look of puzzlement crosses his face when I reference the occasional old TV show or movie and then I quickly remember that I am the older one.

My current opinion on the subject of age differences in relationships is, as long as the younger person is a consenting adult who is not being coerced in any way, and both partners are happy, then it’s fine. But, I am curious as to what you think. How young is too young?